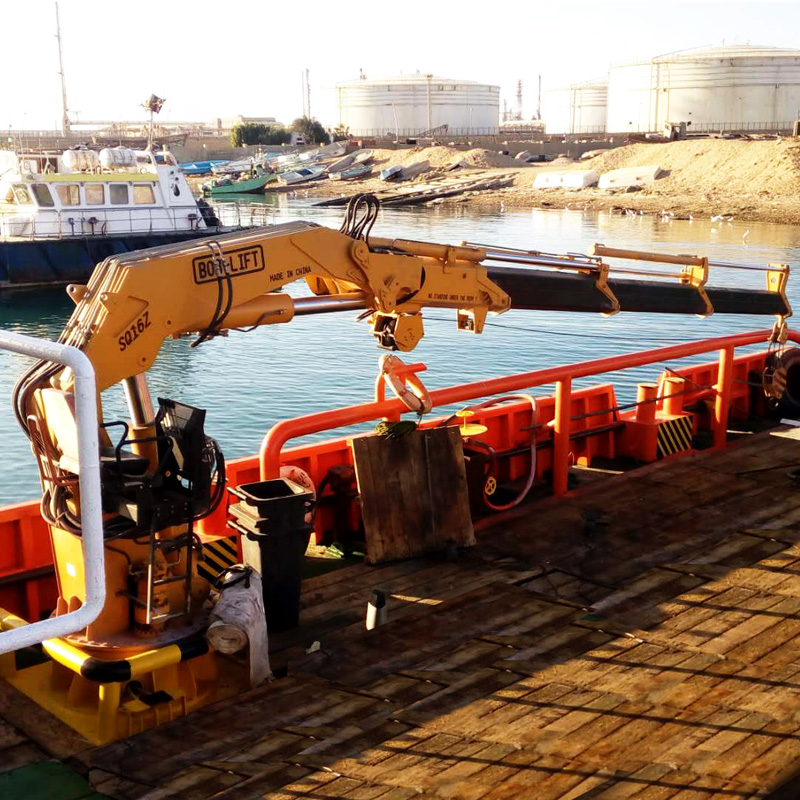 Ship crane model type.
(1) The upper deck crane.
A mechanical device was installed on the upper deck of the cabin. The utility model has a compact structure, can increase the use of the deck area of ​​the ship, and has little effect on the sightline of the bridge. The bridge deck crane is easy to operate, has high loading and unloading efficiency, and has good maneuverability. There is no need for tedious preparations before operation.
Generally fixed, mobile, rotating, portal type, deck cranes are often used for deck cranes. The driving mode can be divided into electric drive and electric hydraulic drive.
(2) Fixed rotating crane.
The most widely used one is to operate on the starboard and starboard sides. It usually lifts 3 to 5 tons. For multi-purpose ships, it is required to lift a container of 20 meters to 30 meters in a single hoist, and a container of 40 feet (30 tons) in a double hoist, with a lifting capacity of 25 to 30 tons.
(3) Mobile rotating crane.
The mobile rotating crane is a large-scale boom for loading and unloading goods with a large span and is a commonly used mobile rotating crane. Movable rotating cranes can be divided into lateral movement and longitudinal movement with the ship.
(4) Portal crane.
This type of crane is widely used for loading containers (see containers) and generally four-legged or C-shaped barges. Equipped with retractable boom, elevator, movable bridge, and cab. The horizontal main girder of the bridge deck is higher than the stacked containers on the deck and has an automatic positioning device. During cargo transportation, the containers can be accurately placed in the container compartment or stacked on the deck. The number of gantry cranes on barges exceeds that of container ships, and they can lift several hundred tons.
(5) Other loading and unloading machinery.
Common ones are elevators, elevators, and conveyors. An elevator refers to a machine that moves vertically along the hull and is used to lift goods between decks. For example, elevators are usually used to connect RO or all decks on ships to transport cargo.
Some cargo barges are also equipped with elevators to load and unload cargo barges. The goods are continuously conveyed by the elevator from the vertical or large inclination direction. The conveyor belt is continuously conveyed, or it can be conveyed on a small slope. Mainly used for self-unloading ships and ships that rely on gangways for loading and unloading.

Next: Introduction of various cranes