Telescopic truck cranes, also known as boom trucks, are used to lift materials by using hydraulic winches and lifting and lowering booms. The operation is very simple: rotate, stretch, and lift as needed.
With the entry of knuckle boom cranes into the North American market and their popularity in foreign markets, it is important to distinguish between these two types of cranes and to understand the advantages of boom trucks over knuckle boom cranes. 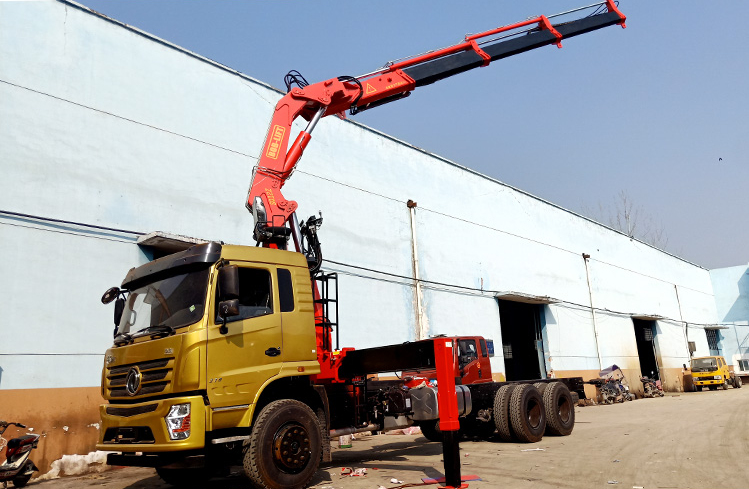 winch
The telescopic boom provides a winch that is permanently fixed to the crane and is ready to be lifted immediately, while the articulated crane mainly uses hooks on the tip of the boom to lift the load. The winch of a telescopic crane is combined with a rotating and telescopic superstructure to move the load in a linear manner, making it easier to operate. Therefore, when placing fragile equipment, the winch can place the load more easily regardless of the lifting radius. Wire ropes commonly used in oil, natural gas, and utilities have also greatly improved the accuracy of placing or adding loads. Since the winch is the main crane structure, it has a holding valve that can hang heavy objects for a long time without drifting. Knuckle boom cranes are not designed to hang loads for long periods of time.
When using a telescopic boom to lift a load, the lifting energy first reaches the winch, and then reaches the lifting cylinder and crane structure. For the boom truck, the load is usually moved to different radii by lifting the boom, rather than telescoping the boom itself when the load is suspended. Compared with knuckle boom cranes that require telescopic loads in most operations, the wear on the jib and wear pads is much smaller. For a knuckle boom crane, energy first enters the boom structure and telescopic cylinder, and then enters the lifting cylinder and crane structure. Over time, this means that knuckle boom cranes face more wear on the boom and extension system, and require more maintenance than telescopic boom truck cranes.
Control
The boom truck crane is controlled by the lower control station or remote control of manual or electric/hydraulic control devices. When using the fixed control device, the operator can safely leave the ground and stand in front of the turret or in the enclosed engine room. Increase maximum visibility of events. For knuckle boom cranes, the lower control station is usually installed on the side of the turret and needs to stand on the ground next to the crane. This greatly hinders visibility during operation.
Boom
The telescopic arm or fixed arm extension device on the telescopic boom is not only easy to connect and use, but also can extend the extension range of the boom to 55 feet. Using the cantilever, the boom truck crane can reach a boom length of up to 201 feet, which is very useful when placing loads on high places or using working platforms to lift people. Articulated cranes are usually limited to a boom length of about 100 feet. When using a boom truck with a jib extension, the working height can reach 207 feet (65m). For all boom trucks, the boom itself is stored on the side of the boom when not in use and can be removed as needed.
Work platform
Telescopic forklifts improve the ease of use and usability of lifting personnel through the work platform, allowing very stable and direct movement: just lift the boom and extend and retract. The working height of the boom truck can reach more than 207′, and the driving is very stable. For knuckle boom cranes, the working platform is connected to the tip of the jib. Due to the non-linear movement of the crane, the crane itself may be very shaken and unstable. The working height provided by the working platform on the telescopic truck crane is roughly the same as the empty working platform, but the price is much lower.

Next: Crane size and selection